Available in a number of sizes and styles

YOUR BREW, YOUR WAY.

Why Should You Can?

There are many advantages to canning your drinks, for starters cans limit exposure to both light and oxygen, keeping the brew inside fresh and flavourful for longer.

Additionally, cans create a better airtight seal than bottles. During the canning process, the aluminum container is completely sealed, which prevents additional oxygen from reaching the contents until someone opens the can. In contrast, plastic bottles can occasionally let tiny amounts of air in, which can add up over time.

There’s a reason that most of us pick canned beer when we pack a cooler. Bottled beer is heavier and more fragile. The same thought process applies to canned cold brew. For example, a six-pack of glass bottles weighs more than 3kg on average; meanwhile, a six-pack of canned drinks weighs around 2.25kg. 750 grams might sound like a small difference until you’re halfway through a 5km hike to your picnic site.

Cans Are Better for the Environment Than Bottles

There are multiple reasons why cans are better for the environment. First, because cans are lighter and more compact, it takes less fuel to ship them. Second, most communities have more robust recycling and deposit programs for aluminum than they do for glass or plastic. While only 26.4% of recycled glass and 32% of plastic actually gets reused, the EPA reports that 54.9% of all aluminum cans get successfully repurposed after recycling.

Like many people, you might believe that coffee tastes better out of a glass bottle. However, blind taste tests have shown that there’s no consistent difference between the flavours of bottled and canned coffee.  In 2017, researchers had 135 coffee lovers taste the same coffee in both cans and bottles. Then, they tasted each coffee in a blind taste test. While more than 61% of the participants preferred bottled coffee to canned coffee when they saw its container, those numbers didn’t hold up in the blind testing. Instead, the numbers were split almost evenly between canned and bottled coffee.

If you feel like a canned coffee tastes tinny or metallic, it’s not the can’s fault. All aluminium cans are lined with a coating that protects the contents. Instead, that metallic taste is likely caused by problems in the brewing process, such as issues with water chemistry and ingredient storage. Remember also that you’re not really supposed to drink your drink out of the can anyway; coffee always tastes better poured into an open glass, whether it came to you in a can, glass or a plastic bottle.

We use Orora as our can supplier who provide a spectum of printing options. From embossed to fluorescent and glow-in-the-dark ink. They've got you covered with all your printing needs!

If you want the full list of printing options, check out their brochure here.

How Does This Work?

Get Your Drinks Canned With Us!

Contact us and let us know that you are interested in our Canning service. (We can also Contract Brew for you too)

We offer several sample options which we'll discuss with you.

SEND US YOUR BEVERAGE

Or ask us to Contract Brew your beverage for you and send us the recipe you want.

Once everything we need arrives we'll get started on brewing/canning your product.

Did you know that we can also send your cans using cold transport? Ask us for a quote!

Now that you have your products you'll be able to start selling!

Why Use Brew Projects?

There are many risks to creating your own brew or canning at home. For starters the potential of spores and bacteria is very high when you are doing this yourself. You might also find that your shelf life will vary drastically.

Have you also considered the legal liability of creating your own drinks at home or at your roastery?

Here at Brew Projects, we pride ourselves on being HACCP certified, we tick all the boxes and will produce a safe beverage for you customers to enjoy. We do our best to keep your brew as consistent as possible* and we will provide you with a great shelf stability (for a fresh product) with no preservatives or pasteurisation needed.

Brew Projects can also provide you with a full analysis on your brew with lab tests and if you're using us to brew your product, we can offer you Cold Press, Cold Drip & Cold Brew unlike many of our competitors.

We can also roast your coffee for you nearby. This lets you use the freshest coffee possible and also allows us to reduce your costs as you don't need to ship your roasted coffee across the country.

Additionally, we have a graphics designer on our team who can assist with with any of your graphics or branding needs.

Finally we can even print or label your cans for you, and if you are ordering printed cans, we won't charge you a fee for storing your cans with us for the first 3 months.

*coffee is a natural product that does vary between harvests and seasons.

Our proprietary Cold Press process uses a 2 tonne hydraulic press to create pressure in the brewing tank. This is then slowly pressed over a period of 14-22 hours.

Our Cold Drip process uses a commercial drip brewer which drips ice cold water over ground coffee over a period of 5-16 hours. 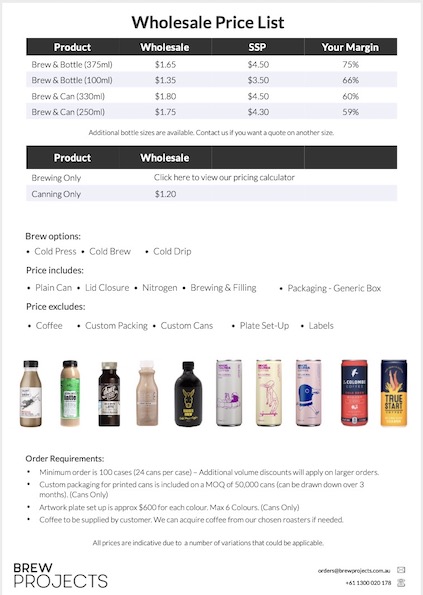 YOUR BREW, YOUR WAY.

Our price list focuses around a full solution of contract brewing and canning. If you are only interested in using our canning service, please send us a message using the form below; or email/call us directly to start the conversation.

Get in touch with us If you still have questions on our canning service, or if you want a quote.

Thank you! Your submission has been received!
Oops! Something went wrong while submitting the form.

Brew Projects are incredibly knowledgeable and friendly. I'm very happy that I chose to work with you guys.

The Cold Press concentrate you have provided is the best I've tried., it totally blew us away!

We're really impressed by the shelf life of your brews and the flavour of your Cold Press coffee. We'll be ordering more soon.